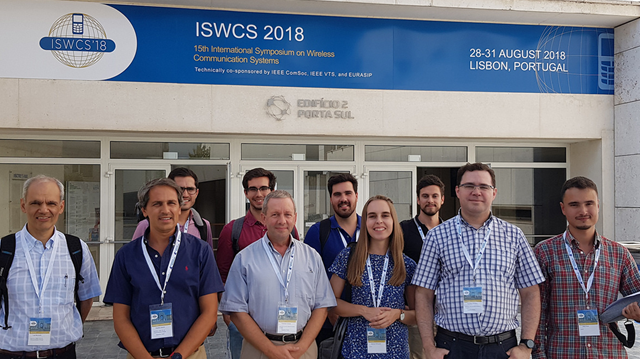 ISWCS 2018 welcomed 205 academic and industrial researchers, scientists, engineers, and business people from more than 50 countries. ISWCS 2018 Lisbon was particularly proud of presenting a set of keynote speakers of unusual quality, all well-known leaders in wireless communications. Lisbon hosted Prof. Ian Akyildiz, who is the most cited researcher in the world in the field of wireless communications, Prof. Syed Jafar, the inventor of interference alignment, Prof. Angel Lozano, one of the most influential scientists in signal processing for wireless communications, prof. Mérouane Debbah, also one of the most influential academics in wireless and now head of research of the Huawei European labs in Paris, and Dr. Harish Viswanathan, head of radio research at the Nokia Bell-Labs in New Jersey. All of them are IEEE Fellows. The list of Tutorial Lecturers was also quite unique and not-subpar, featuring world leaders lecturing six tutorials on current hot-topics in wireless communications.

The best paper award was snapped by a team of Nokia researchers and academics at Tampere University of Technology, in Finland, and the best student paper award was given to a student of prof. Luc Vandendorpe’s group at the Université Catholique de Louvain, in Belgium.

This year's edition took place between 28-31 August 2018, and was technically co-sponsored by the IEEE Communications Society (ComSoc), the IEEE Vehicular Technology Society (VTS), and by The European Association for Signal Processing (EURASIP). On the industrial side, ISWCS’18 Lisbon had Rohde & Schwarz as a sponsor.

The conference will certainly leave the participants fond memories not only of the technical programme, but also of the banquet aboard a cruise boat on the river Tagus!


In the photo: the three General Chairs, the Publications Chair, and students and post-docs from ISCTE-IUL and FCT-Nova, who served as staff.