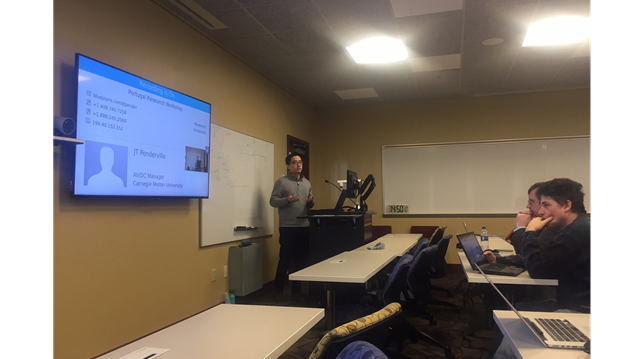 Project CONQUEST addresses the optimization of the capacity trade-off in Small Cells for the 5G technology and investigates aspects of spectrum sharing in both terrestrial cellular scenarios and heterogeneous networks (HetNets) with drone small cells.

It is an exploratory research collaboration between Prof. Jon Peha team in Carnegie Mellon University (CMU - Departments of Electrical and Computer Engineering / Engineering and Public Policy), and two main Portuguese research teams, one from Instituto de Telecomunicações (IT), led by Prof. Fernando Velez, from IT-UBI, and another from University of Coimbra (CISUC), led by Prof. Edmundo Monteiro. The CMU team will mainly contribute with knowledge on spectrum sharing and public policy in the management of spectrum. The contributions from the Portuguese teams will include optimizing the economic trade-off of HetNets by considering shared spectrum in carrier aggregation, business aspects, opportunistic spectrum access, simulation, security issues and hardware testing of real HetNets in the ORCIP infrastructure platform (http://www.orcip.pt).

The Wireless Research Workshop, hosted by Jon Peha, in the Pittsburgh Campus of CMU, on January 28th, 2019, facilitated the research results outreach different audiences from CMU, not only in Pittsburgh, PA, but also in the Silicon Valley and Alaska Campus of CMU, via Bluejeans, as well as in other remote regions, like Poland.

Achievements of the CONQUEST exploratory project include not only aspects of Licensed Shared Access in HEtNets with Small Cells but also the investigation of the impact in the system capacity of considering the two-slope characteristic of the propagation (and the comparison of the promising millimeter wavebands, for the shortest coverage distances, in Small Cell deployments). Efforts also include the in depth research on the increase of efficiency in the use of spectrum and infrastructure for multi-network access, as well as answering to the challenges of spectrum management in 5G Drone Small Cells, the research conducted by Prof. Pedro Sebastião, from IT. A Workshop and Tutorial Day on “Communications, Public Safety and Innovative Applications with Aerial Drones” is being organized by the CONQUEST team, to be held in the Heaquarters of Ordem dos Engenheiros, in Lisbon, co-located with ConfTele 2019 (June 26th-28th).


Photo: Nandi Zhang, Ph.D. student from CMU, during his talk in the Wireless Research Workshop [Photo courtesy of Pedro Sebastião].