IT researchers develop a toolbox to denoise STM images 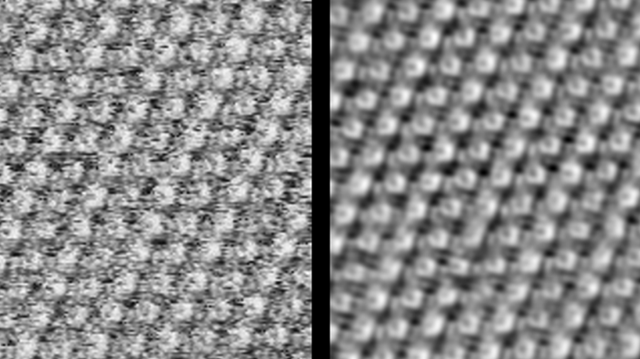 The Scanning Tunnelling Microscopy (STM) is a technique that allows visualizing materials at atomic resolution providing images of the surfaces´ composition and quantitative information of its constituent parts (atoms and/or molecules).

STM images allow for chemical identiﬁcation of individual atoms, which makes STM the elected technique to design and develop new nano materials. However, this technique is very sensitive to the environment vibrational and electronic noise which inﬂuences the images quality. Usually, it´s hard finding the best conditions to obtain high-resolution images with low noise. Noise signals can impair an adequate STM image interpretation, therefore it´s necessary to correct and eliminate them.

Facing the challenge of removing the noise to allow the correct image analysis, in DeToxSTM, a project funded and developed in IT, researchers developed new imaging processing tools able to denoise STM images.

The STM denoising algorithm is based in the reformulation of the true estimation problem as a sparse regression, often termed sparse coding. Following the standard procedure in patch-based image restoration, the image was partitioned into small overlapping square patches and the vector corresponding to each patch was modelled as a sparse linear combination of vectors, termed atoms, taken from a set called dictionary. The sparsity of a representation on a dictionary is strongly linked with the level of self-similarity of the images under study. It happens that STM images have a high level of self-similarity and, therefore, are natural candidates for denoising via sparse regression on learned dictionaries. STM images pose yet an additional challenge: there are plenty of artifacts which appear in a structured way as consecutive line segments on the scanning direction. The tasks involved in the extraction of artifacts were: a) Detection of outliers; b) Application of denoise algorithms to the STM images without outliers. The denoise algorithms were implemented as add-ons for the freeware Gwyddion and made available for all the scientific community.