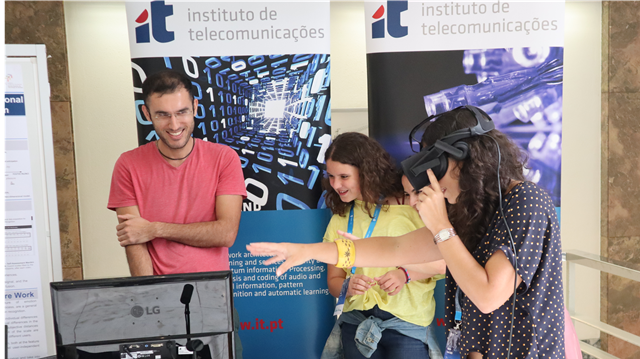 The Keep in Touch 2019 gathered the Técnico community to celebrate the 108th anniversary of Instituto Superior Técnico. Students, Professors, researchers, other members of the IST staff, employees of the companies of the IST SPIN-OFF Community and all the partner companies of the IST, as well as family and friends, were all invited.

As it happens every year, the 23rd of May, the Day of Técnico, represents an opportunity for its visitors to embark on a journey that is both nostalgic and futuristic.

From the Faraday Museum there were many examples on display of the several technological achievements of the past.

On the other hand, the several departments and research units of IST encouraged everyone to look forward. At the IT stand it was possible to engage in an immersive experience with a VR Demo, developed by the Multimedia Signal Processing group. At the IT stand there was also a big display of technology that interconnects ICT´s and health, such as a portable non-invasive technology that uses microwaves in breast cancer screening. Other examples on display were a PCG and ECG signal acquisition and processing system and a novel data acquisition system that allows monitoring patients inside and outside of hospital environment for long periods of time. At the IT stand, visitors could also learn about a new project being developed by the Pattern and Image Analysis group, were researchers are exploring several biosignals, in an immersive VR elicitation setup, to access emotions.