PhD hosted by IT wins the 2018 IBM Scientific Award 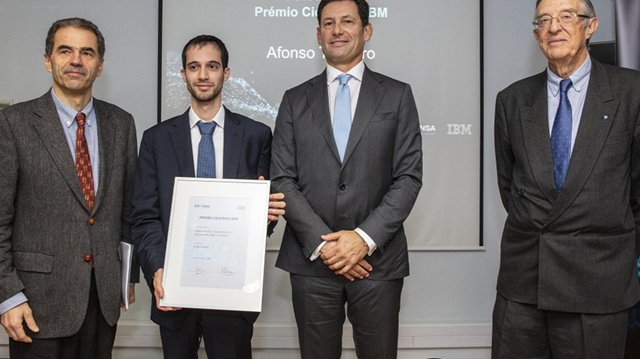 Having recently concluded his PhD at Instituto Superior Técnico hosted by IT, Afonso Teodoro was the winner of the 29th edition of the IBM Scientific Award. Afonso was distinguished for his work “Mixture Models for Inverse Imaging Problems – Going Beyond Denoising in a Plug-and-Play Fashion”, developed under the supervision of Mário Figueiredo (IT/IST).

In his work, Afonso Teodoro aims to improve the information extracted from images or photographs with poor resolution. “Basically, in this work, I start with a noisy and blurred image and try to imagine a richer and cleaner version”, he explains. “To this end, I developed a methodology that is applicable to various types of image degradation, as I just mentioned, which produces very interesting results in terms of final image quality” he concludes. From medicine, industry, automation, safety, agricultural and entertainment, Afonso´s work has many possible applications.

Afonso Teodoro received the €15k cash award during a ceremony that took place in Técnico last December 17, in which the Minister of Science, Technology and Higher Education, Manuel Heitor, was present.

Since its first edition in 1990, the IBM Scientific Award is attributed every year by IBM Portugal to a young Portuguese researcher to distinguish works of high merit in the field of Computer Science.