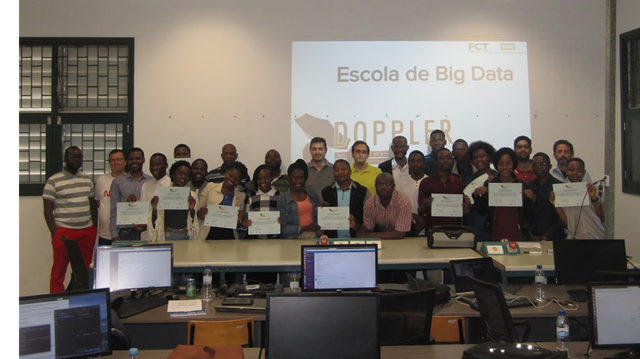 The project´s aim is to improve the quality of life in Mozambique using high-tech projects such as the Square Kilometre Array (SKA). (see more)


DOPPLER is a collaborative project between Portuguese and Mozambican institutions which aims to improve quality of life in Mozambique using high-tech projects such as the Square Kilometre Array (SKA). The Portuguese institutions involved include the Universidade de Aveiro (Host), IT, Faculdade de Ciências of the Universidade of Porto (FCUP), University of Coimbra (UC) and support by TICE.PT while the Mozambican counterparts include the Universidede Eduardo Mondlane and the Non-Governamental Organisation OSUWELA.

The main objective of DOPPLER is to leverage the experiences offered by the research institutions in Portugal coupled with on the ground knowledge and experiences of the Mozambican institutions to improve quality of life in Mozambique through research and high-tech projects. In order to achieve this, DOPPLER contextualised the Mozambican needs to deliver, not only, advanced training in areas such as Big Data (led by João Paulo Barraca from IT), Earth Observations (led by Ana Cláudia Teodoro and Mário Cunha from FCUP) and Radio Astronomy (led by João Fernandes from UC), but also bring in industrial linkages (led by Domingos Barbosa from IT) born out of the experiences gained through the ENGAGE SKA project (see https://www.it.pt/Projects/Index/4507). Coupled with all this, DOPPLER has a component of STEM training using robotics (António Batel from OSUWELA). The Universidade Eduardo Mondlane (led by Cláudio Paulo) was tasked with drawing a roadmap for their vision of astronomy and the SKA, both within the University but also in Mozambique.

In the first year, DOPPLER was able to deliver the advanced training to institutions in Mozambique that included participants from the local municipalities, civil servants and the banking industry. Initial contacts were made with local TICE businesses in order to prepare a meeting the following year. With the COVID-19 heists DOPPLER’s second year has been postponed including several meetings with potential industrial partners. Furthermore, it was explored the possibility of remote training however, it was quickly realised that in the first year the students really appreciated the face-to-face interactions.

IT´s focus on DOPPLER is to build capacity around different components that will be required for the SKA from an infrastructure perspective including data transport, cyberinfrastructure, smart grids and the use of Machine Learning and Artificial Intelligence.

DOPPLER is funded (ref: 333197717) by the Aga Khan Development Agency and the Fundação para a Ciência e a Tecnologia, Portugal.

By year
By Site
© 2021, IT - Instituto de Telecomunicações | All Rights Reserved