Instituto de Telecomunicações: 30 years in science, 30 years of achievements in the field of TICE 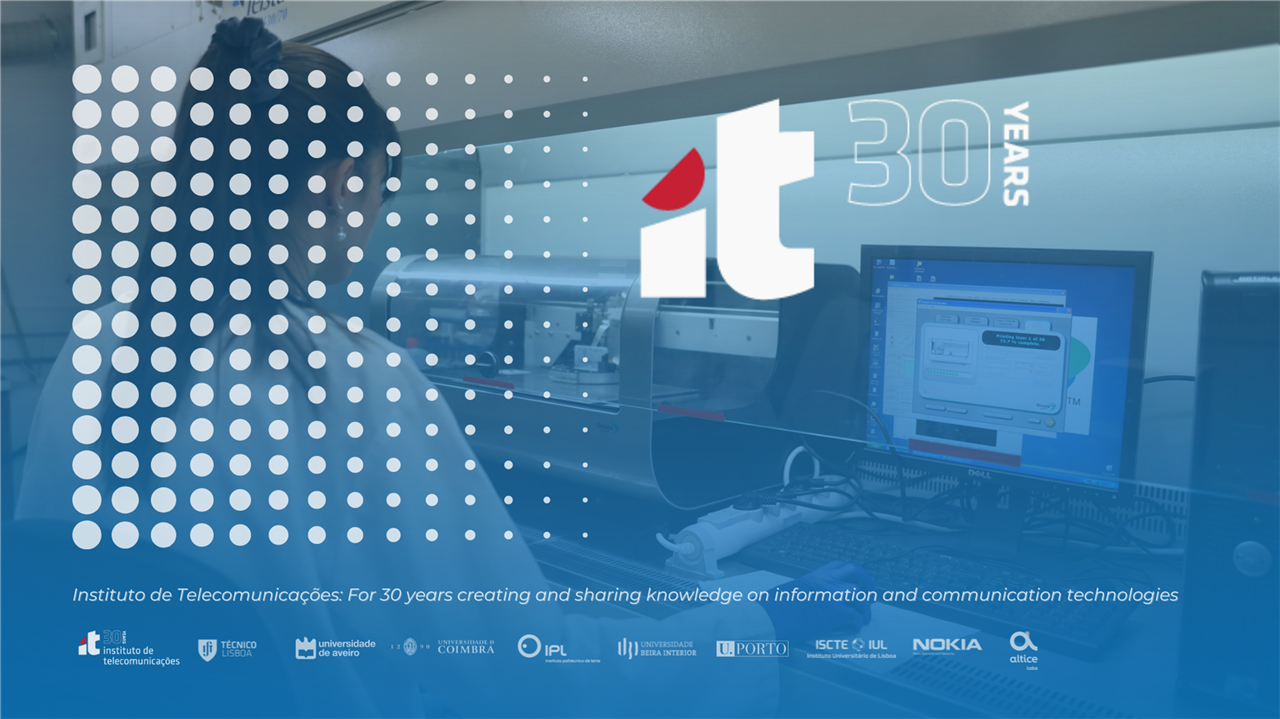 Instituto de Telecomunicações (IT) is celebrating 30 years since its inception.

IT is a private, not-for-profit organisation, a partnership of nine institutions with experience in research and development in the field of Telecommunications.

Setting up of IT was the result of a 7.5 million Euro grant from Programme CIÊNCIA, through three contracts signed in 1991, one for each of the university members (University de Aveiro, Faculty of Science and Technology of the University of Coimbra and Instituto Superior Técnico). A separate and complementary agreement was signed between the University of Aveiro and Portugal Telecom. This investment enabled new infrastructures to be built and research laboratories to be equipped. IT research centres were built on the premises of the three University partners. Installation was concluded in Aveiro in 1993 and in Lisbon and Coimbra in 1994.

Later on, other University partners as well as an industrial partner joined IT: Nokia Solutions and Networks in Nov 2004, University of Beira Interior in Dec 2008, University of Porto in Dec 2009, ISCTE in Dec 2010 and Polytechnic Institute of Leiria in Dec 2013.

Since its birth, IT has been the incubator and home for many young engineers and scientists, gaining a prominent role in the scientific research and development of telecommunications in Portugal. Therefore, it was naturally granted the status of Institution of Public Utility in 1995, and of Associated Laboratory of the Portuguese State in 2001, evaluated with Excellent.

Although IT always preserved the values of academic research, such as democratic and distributed management, and the freedom of thought and scientific topic selection, it also wanted to actively contribute to society, long before the nowadays buzzwords of public policies’ support and response to societal challenges. Moreover, as IT inscribed in its mission statement the creation and dissemination of scientific knowledge, as well as technology transfer, IT soon opened its doors to national and international companies for services and mostly collaborative research, which culminated in 2018 when IT was recognised by the National Innovation Agency a Center of Technological Interface (CTI).

Today, IT is proud of its vast team of integrated researchers, which exceeds 200, of the number of Ph.D. and Masters students, around 450, the quantity and quality of its projects, more than 140 national and 50 international, in fundamental areas, and more than 55 active patents.

IT hosts many projects in fundamental areas of our society and in people's lives, which cover several branches of society, respectively, in the way that we communicate, in the mobility and organization of our cities, in the aerospace industry, in health and life sciences, in the digital transition of our companies and organizations, in space observation and monitoring, on the resilience of critical infrastructure, in civil protection, in transport and mobility, and in the environment.

Some examples are the Aveiro Tech City project, which consists of the implementation of a prototype of a Smart City, all connected by 5G; the QuantSat-PT project, the first Portuguese CubeSat, ISTsat-1, one of the experiments on board ESA’s Fly Your Satellite Programme, with participation and sponsoring from IST, INESC-id and IDMEC research institutes; the MARES project, which main mission is to contribute to the resolutions of a big and global problem, the marine waste, and, is involved in a project to power a lunar station and integrates an important consortium the Portuguese Quantum Communication Infrastructure, recently financed with 6.8 million euros.

Thankfully, there is a lot to celebrate. It has been a significant journey, full of achievements.

For all these 30 years of IT service to science, industry, and technology transfer in Portugal,