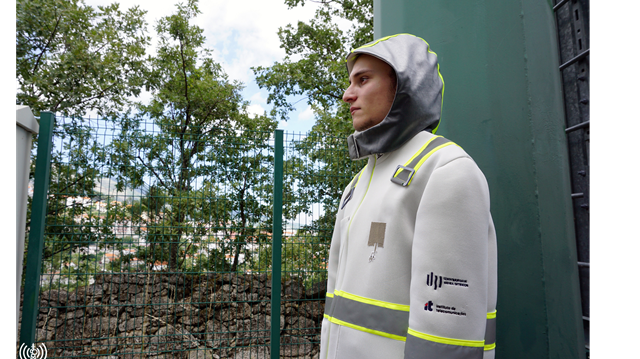 The E-caption 2.0, developed in collaboration between researchers from UBI (Caroline Loss and Rita Salvado) and IT in Aveiro (Pedro Pinho and Daniel Belo), won the Techtextil Innovation Award in the category New Application. This is a smart and safe coat, designed for the technicians responsible for the maintenance of the base radio antennas.

When a given antenna needs to be repaired, usually the signal is shut down to protect the technician. With the E-caption 2.0 that is no longer necessary, thanks to an integrated protective layer that blocks the radiation. Besides giving protection the coat is also smart, since it has a built-in circuit that captures energy and emits an alert if the radiation reaches a dangerous level for the technician wearing the E-caption 2.0.

Researchers now whish to explore new applications for this technology. “The idea now is to take this concept, which works, and transform it so to by applied in other types of clothing, covering other audiences, such as the fashion public – it can be integrated into any type of clothing to power small devices, like recharging the phone and the iPod, " says Caroline Loss.

This was the 15th edition of the Techtextil Innovation Award. The ceremony took place during the first day of the TechTextil and Texprocess 2019, held between 14-17 May, in Frankfurt, Germany. The other award categories were Sustainability, New Technology and New Material.