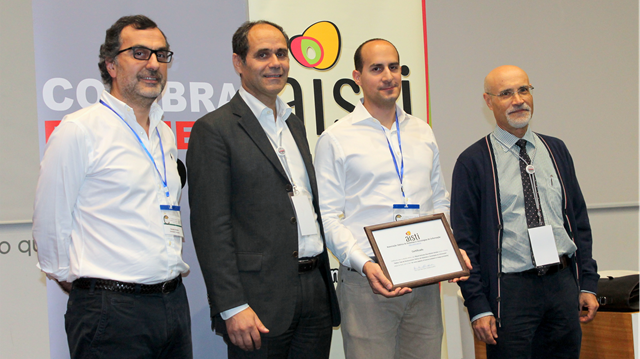 Miguel Simões was distinguished by the Associação Ibérica de Sistemas e Tecnologias de Informação – AISTI with the “Best PhD Thesis in Information Systems and Technologies 2018” award, for his thesis “On some aspects of inverse problems in image processing”. This award is attributed every year by the AISTI, to distinguish the best work, developed within the scientific areas of Information Systems and Technologies, with the goal of stimulating scientific innovation and the rigor of research work, as well as the dissemination of high quality scientific works. Miguel Simões received the distinction during the 14th Conferência Ibérica de Sistemas e Tecnologias de Informação – CISTI´2019, held in Coimbra, Portugal between 19-22 June.

Currently working as a Post-Doctoral Researcher at Duke University, USA, Miguel Simões concluded his PhD at Instituto Superior Técnico (IST) in October 2017. The doctoral work was developed in IT under the supervision of Luís Borges de Almeida and José Bioucas-Dias (both from IT/IST) and also Jocelyn Chanussot, from the Grenoble University, in France. From this work Miguel has already published several other scientific papers, both in international conferences as well as in high-impact journals.


Photo: Miguel Simões (second from the right) with his winner certificate