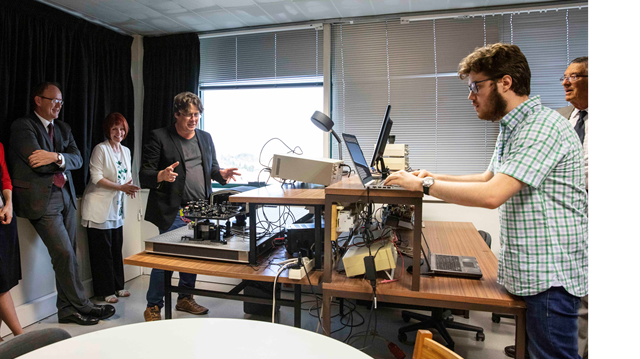 The 180 meters between the 9th floor of the north and south towers of Instituto Superior Técnico (IST) were enough for IT to make history in Portuguese telecommunications. This July 8th the Physics of Information and Quantum Technologies (PIQT) group of IT in Lisbon did the first demonstration of quantum distribution of cryptographic key (QKD) via optical free space quantum communications in Portugal.

Present in this first demonstrations were Carole Mundell, Chief Scientific Adviser of the Foreign and Commonwealth Office of the United Kingdom, Christopher Sainty, British Ambassador in Portugal, Jürgen Mlynek, chair of the Strategic Advisory Board of the Flagship in Quantum Technologies European program, Carlos Salema, president of IT and the Academy of Sciences, Arlindo Oliveira, president of IST, among others.

Two days later, on the July 10th, a second demonstration took place during the closing session of the Ciência2019, at the invitation of Manuel Heitor, Portuguese Minister of Science, Technology and Higher Education. This second experiment, on stage, demonstrated the portability of the equipment and the technology outside the laboratory.

Through its coordinator Yasser Omar, PIQT is participating in the European project Quantum Internet Alliance. This project is part of Flagship in Quantum Technologies, a 10-year program with a budget of 1 billion Euro, which the Commission launched in 2018 to make Europe one of the world's leaders in quantum technologies.


Photo: The first experiment was carried out by Manfred Niehus (PIQT - IT/ISEL) and José Jesus, second year student of the MSc in Physics Engineering at IST and a fellow of the Gulbenkian program “New Talents in Quantum Technologies”. Credits: Débora Rodrigues / Técnico