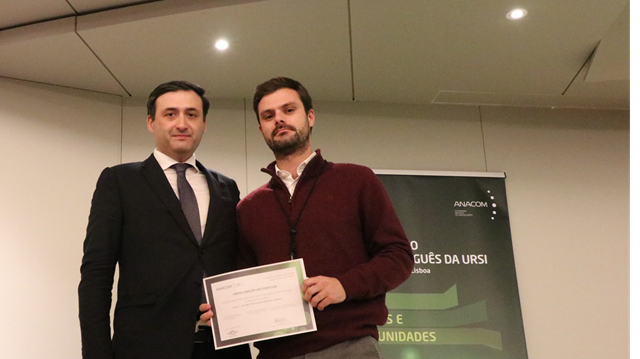 Once again the research developed at IT received great recognition in another edition of the URSI's Portuguese Committee Congress, sponsored by ANACOM. In this 13th edition, the ANACOM URSI Award distinguished the work " ISTSat-1 - The First Portuguese University CubeSat”, which, according to the jury, was recognized for its “excellent quality, scientific rigor, clarity and cross-disciplinary”.

The ISTnanosat team developed a CubeSat to perform a space mission demonstrating Automatic Dependent Surveillance – Broadcast (ADS-B) technology for tracking aircrafts in remote regions of the planet. Since 2017, under ESA´s “Fly your Satellite!” Program, the team chose to develop almost all subsystems from scratch through several MSc theses. Having already designed, built and integrated all subsystems, and passed several testing campaigns, the team is now focused on the final acceptance tests and preparation for launch, which is likely to happen in the last quarter of 2020. The ISTnanosat team includes researchers from Instituto Superior Técnico, IT, INESC-ID and IDMEC.

The winner of the Best Student Paper Award was José Jesus, student of the 2nd year of the Master in Engineering Physics from IST, with the work: "Quantum Key Distribution through free space", supervised by Manfred Niehus (IT/ISEL) and Yasser Omar (IT/IST). This work reports the first demonstration of free-space quantum key distribution (QKD) in Portugal. By demonstrating free space QKD over 200 meters between the two towers of Instituto Superior Técnico, the work opens the way for autonomous Portuguese national and international quantum space communications, as well as for quantum communication between satellites.

João Caiado, from the University of Aveiro, was in third place, with the work “Ultra-wideband Log-periodic Antenna Array for LEO Constellations Terminals”, a work developed at IT in Aveiro, under the coordination of Tiago Varum and João Matos (both from IT/UA).

There was also involvement of IT in the second place, won by Daniela Godinho (IBEB-FCUL) with the work “Extracting Dielectric Properties for MRI-based Phantoms for Axillary Microwave Imaging Device”, supervised by Raquel Conceição (FUCL-IBEB) and co-supervised by Carlos Fernandes (IT/IST).


Photo: João Paulo Monteiro (on the right), PhD student supervised by Paulo Gil (IDMEC/IST) and Rui Rocha (IT/IST), in representation of the ISTnanosat team, received the certificate of the ANACOM URSI Award, delivered by the Vice-President of ANACOM, João Coelho.