News From IT – Coimbra 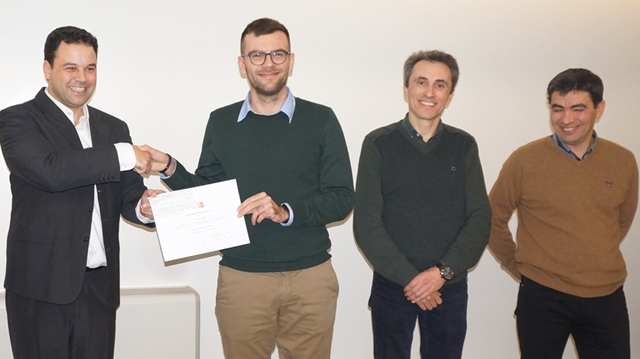 Tiago Oliveira, a student from the Faculty of Sciences and Technology of the University of Coimbra (FCTUC) was distinguished with the "ABB Award", by the multinational Asea Brown Boveri (ABB), for his study in the field of high-reliability electrical energy supply systems, developed within his MSc thesis, entitled "Model Predictive Control of Parallel Connected Power Supplies". The award ceremony was held in the Council Room of the FCTUC central building, at pole II of the University of Coimbra, on January 17.

Tiago´s thesis, for which he obtained the final classification of 19 values, was hosted by IT in Coimbra, developed in the Power Systems group under the supervision of André Mendes (IT/FCTUC) and Luís Caseiro (IT). Specifically, Tiago has developed innovative control algorithms for uninterruptible power supply (UPS), connected in parallel.
UPS systems "allow supplying electrical charges in good condition, even when severe disturbance or interruptions occur in the supply of electrical power", explains André Mendes. The algorithms developed by Tiago Oliveira “allow to control the individual power that each UPS system provides to the charge, thus enabling greater system reliability and performance», adds André Mendes.

Tiago´s thesis was framed within the project DRIFT - “Datacenter Resilience Increase through Fault Tolerance in UPS systems”, under development at the Power Systems group of IT in Coimbra.

The “ABB Award” annually distinguishes students from FCTUC Master´s in Electrical who has obtained the highest classification in a MSc thesis developed within the areas of actioning / speed variation or power transformers. The prize, in the amount of one thousand euros, also includes a paid internship at the company. 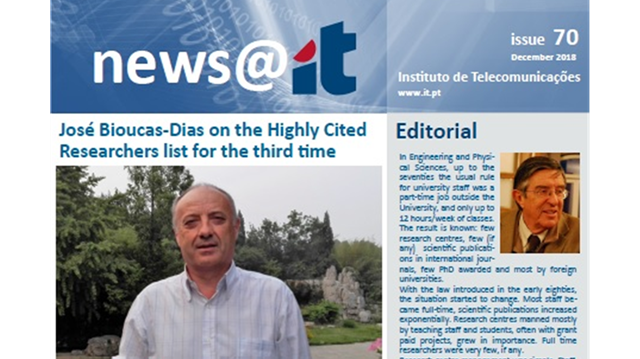 • José Bioucas-Dias on the Highly Cited Researchers list for the third time
• Joel Rodrigues elevated to IEEE Fellow
• Smart Crosswalk: Boosting Crosswalk Awareness with Backscatter and Vehicular Networks
• Making radio astronomy accessible to everyone
• Where are you now? David Ferreira