And the Oscar goes to… A Sea of Robots! 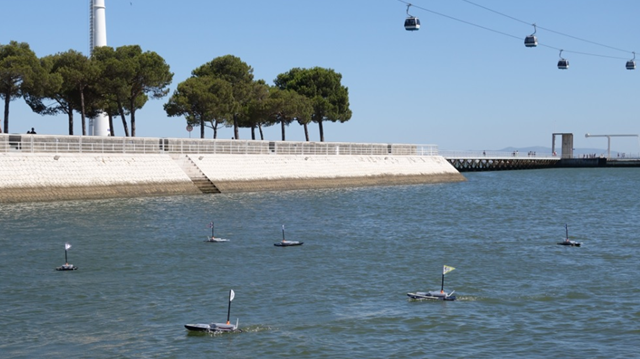 A Sea of Robots was exhibited in the AAAI Video Competition Award Ceremony, held in Phoenix, USA, on February 15 and, for IT researcher Anders Christensen, "The video is the culmination of a lot of hard work. It was a privilege to show the video at the prestigious conference and an honour to receive the Best Robot Video award. My team and I are now more motivated than ever to push our research forward!"

This short film documents the work of researchers Anders Christensen, Sancho Oliveira, Miguel Duarte, Vasco Costa, Jorge Gomes, Tiago Rodrigues, and Fernando Silva, in developing a swarm of intelligent aquatic robots that learn to cooperate with each other to complete missions in a completely autonomous way. Researchers took inspiration from nature to develop this aquatic swarm, and used algorithms that imitate Darwin´s Theory of Evolution to create artificial intelligence that controls each unit automatically.
With an approximate cost of 300€ per unit, a swarm can accomplish various collective tasks such as monitoring an area, navigate in a pack, aggregation and dispersion. 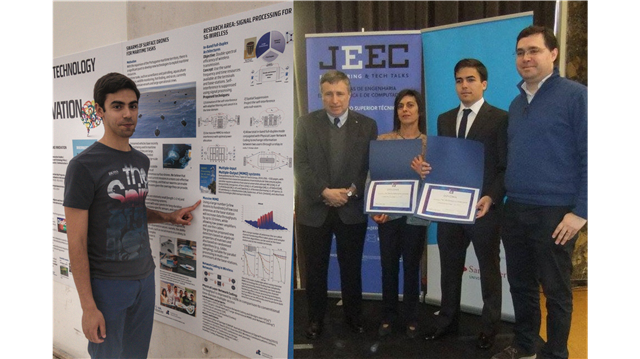 The Luís Vidigal Prize 2015 was awarded this year ex aequo to two master theses supervised within IT. Mr Francisco Rosário and Mr João Sande Lemos received the prize at the ceremony held on 11th March at Instituto Superior Técnico. The Prize is awarded to the best master thesis of the year at IST in the fields of Electrical and Computer Engineering and Computer Science, but since 2001 projects within Aerospace Engineering, Physics Engineering, and other programmes at IST have also received the prize. Notably, the prize had not been awarded to master theses supervised within IT since 2002. Both theses were supervised by Dr. António Rodrigues and by Dr. Francisco Monteiro, both from the Radio Systems Lx Group.
The two winners were both scholars under the IT project “LDimM-NetCod”.
Francisco Rosário’s thesis was entitled “Massive MIMO Processing for 5G Systems: Efficient Detection Algorithms and Applications”. Mr Rosário’s work mostly focused on the signal processing problems in wireless systems with large antenna arrays (where the number of independent antennas can reach the hundreds). The work proposed detection techniques spanning advanced linear algebra and novel methods based on randomised algorithms. One of the papers spinning out of his work is, since January 2016, one of the top-5 most popular papers in the IEEE Signal Processing Letters.
The title of João Sande Lemos’ thesis was “In-Band Full-Duplex Architectures for Future 5G Multi-Hop Networks”. Mr Sande Lemos chiefly focused on the recent parading change in wireless, with terminals receiving and transmitting information in totally overlapping frequencies and at the same time. He proposed several new interference cancellation techniques capable of dealing with the self-interference that arises, including the design of recursive least squares MIMO filtering.